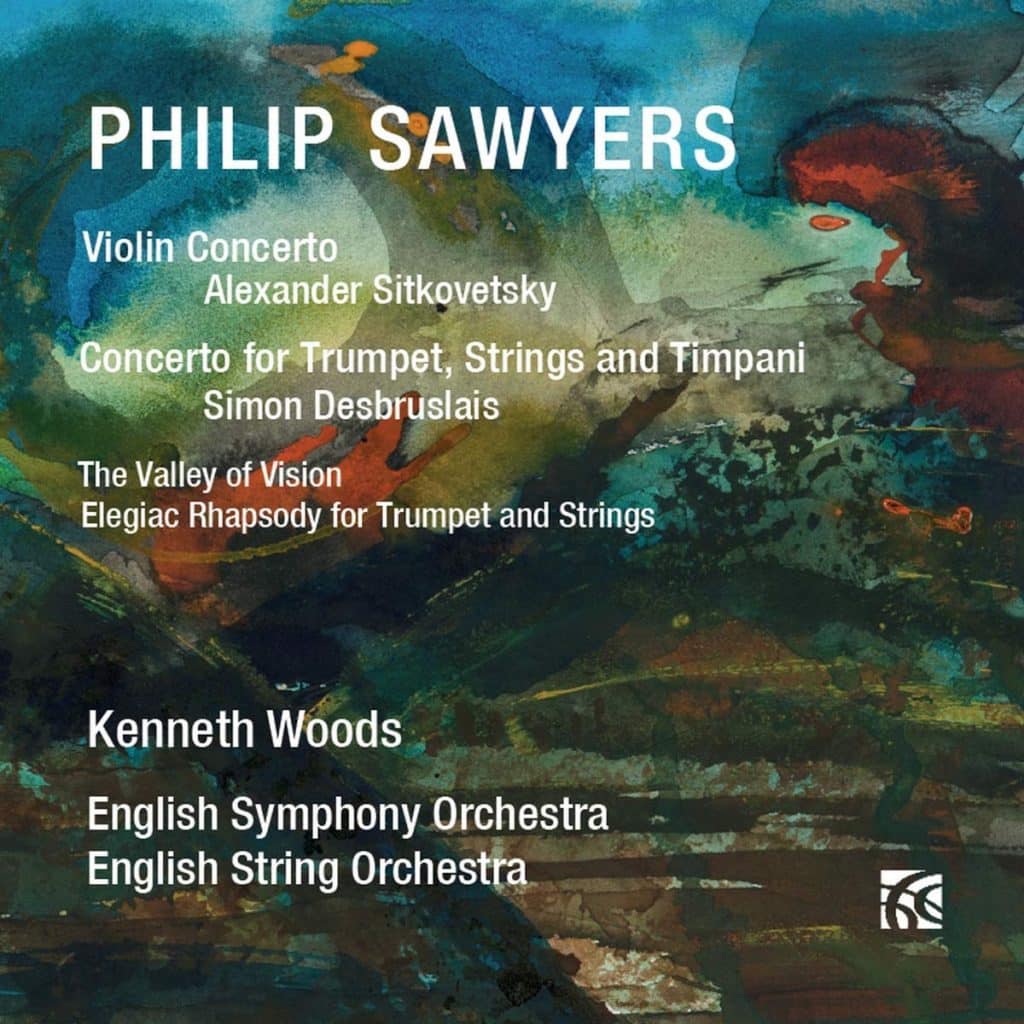 “…the Violin Concerto.. does exude a distinct mid20th-century quality in its formal and expressive objectivity. Both the outer movements keep their lyricism firmly in check through a tensile rhythmic sense, with even the Andante having a restiveness and tension to offset any hint of indulgence: no nostalgic lingering here….Alexander Sitkovetsky renders this piece with appropriate verve, as does Simon Desbruslais the Concerto for trumpet, strings and timpani that arguably leaves the stronger impression. Here the combative outer Allegros make incisive play with this three-way combination, and the central slow movement explores emotional depths which seem the greater for not being dwelt upon. Such probing intensity is no less tangible in The Valley of Vision, a symphonic poem inspired by Samuel Palmer – notably his visionary early landscapes – whose control of momentum, through to the climactic faster section before returning to its initial pensiveness, is never in doubt. Elegiac Rhapsody, Sawyers’s ‘song without words’ written in response to the death of John McCabe, concludes this disc in understated yet affecting manner. The English SO are unfailingly committed in the perceptive hands of Kenneth Woods” Richard Whitehouse, Gramophone Magazine

“This Violin Concerto, premiered by the current forces earlier this year, is impressive; such is the contribution of the orchestra it could almost be a ‘Symphony-Concerto’…. The finale holds a beautiful, long-breathed melody, superbly given here by Alexander Sitkovetsky, whose playing throughout is exemplary…Sawyers has a fervent interpreter in Kenneth Woods, conductor. The Valley of Vision, inspired by painter Samuel Palmer, is heard in a radiant account… it offers both sweet repose and an intense climax.The Elegiac Rhapsody for trumpet and strings, in memoriam John McCabe, is powerful. Simon Desbruslais is a superb interpreter” — Colin Clarke, Classical Music Magazine

“The Valley of Vision is a substantial tone poem for a Classical-sized orchestra…the music becomes quite powerful at times, but the work ends quietly. This is a fine and imaginative composition….This is an impressive disc. All the music is well worth hearing. The music is imaginatively crafted, constantly showing fine melodic invention and a firm sense of purpose and direction. Clearly Sawyers knows how to get the best out of an orchestra. I’m enjoying my discovery of Philip Sawyers’ music and I’m now resolved to catch up with his first two symphonies. I’m sure that the composer is highly satisfied with the advocacy his pieces receive here. Alexander Sitkovetsky and Simon Desbruslais are terrific soloists while the orchestral playing throughout demonstrates assurance and commitment. Kenneth Woods is clearly a very fine and effective champion for Sawyers’ music.” John Quinn, MusicWeb International

“ONE is not often wowed by a new work, but Philip Sawyers’ Violin concerto—premiered here by Alexander Sitkovetsky and the English Symphony Orchestra under Kenneth Woods—really did the trick….Sawyers knows how everything functions…there is so much nuanced and colourful material to savour…[he] develops his ideas organically on long skeins of melody, which in the brooding first movement blossom in a seethingly passionate cadenza. His Andante, too, is gorgeously melodic with a deftly scored landscape of shifting instrumental perspectives…. and the ‘hustle and bustle’ finale is delightfully frothy in an English serenade sort of way, with joyous vignettes and exhilarating challenges for the soloist. Sitkovetsky despatched everything with tremendous aplomb, and the support of Woods and his ESO players sounded terrific even in this hard acoustic. I can’t wait for the CD” -–David Hart, The Birmingham Post

“Sawyers’s Violin Concerto has moments of breathtaking intensity, especially the deeply melancholic slow movement. Anyone familiar with his music, notably the celebrated Third Symphony, will be immediately aware of his individual voice at the exquisitely lyrical opening of the first movement, the violin suspended magically on a high E, which heralds something mighty and tumultuous, and the Finale is a tour de force as much for the orchestra as the soloist…Sitkovetsky was hugely at home, bringing colour, warmth and insight to his performance as well as dazzling virtuosity, and the ESO was equally impressive, a tribute to Woods’s inspiring and rejuvenating tenure. Sawyers’s Violin Concerto (heard here between Mendelssohn’s Hebrides Overture and Schumann’s Second Symphony) will surely find its way into the repertoire and is to be released by Nimbus later this year.” Adrian Williams, Classical Source

FIVE STARS “When Philip Sawyers’ Violin Concerto was premiered this year my reviewing colleague was “wowed” by it. Listening to this recording performed by the same forces – soloist Alexander Sitkovestsky and the English Symphony Orchestra under Kenneth Woods – I was similarly impressed. With its emphasis on long flowing melodic lines it recalls Nicholas Maw’s equally approachable concerto, although its sound-world is very different. Sitkovestsky illuminates the concerto’s musical textures and revels in its fiery cadenza while Woods and the ESO clearly enjoy the energetic finale’s robust pastoralism. Simon Desbruslais is the soloist in the Concerto for Trumpet, Strings and Timpani and the Elegiac Rhapsody for Trumpet and Strings. The concerto is immensely challenging… and Desbruslais rises to all its demands. The Rhapsody and the tone poem The Valley of Vision find Sawyers in deeply meditative mood.” Norman Stinchcombe, Birmingham Post