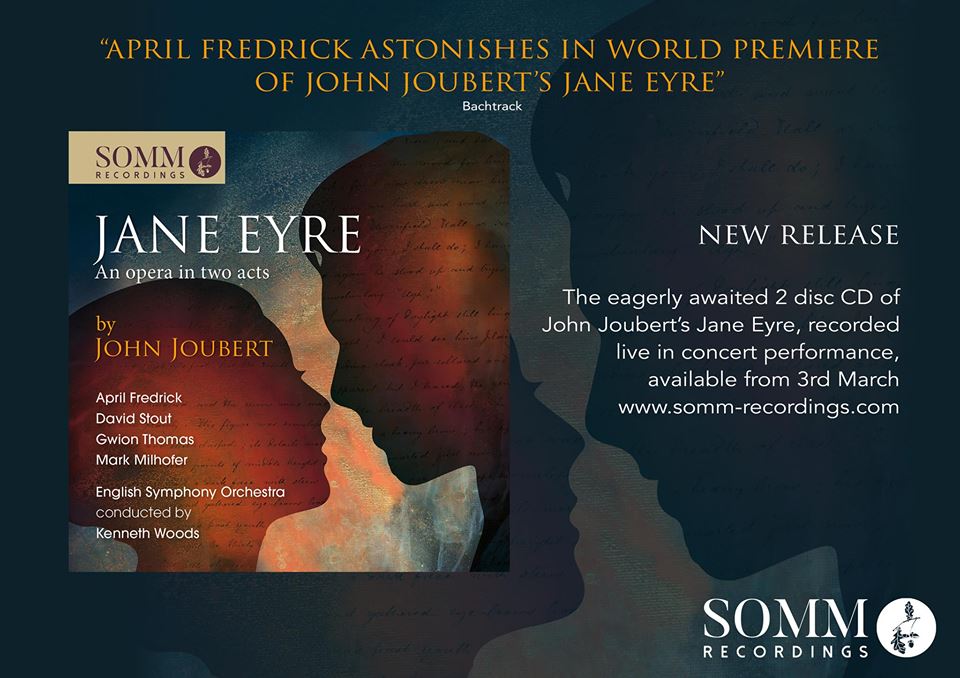 “As a timely reminder of the melodic strengths and potency of Joubert’s music this fine performance with April Fredrick as Jane, David Stout as Rochester and Mark Milhofer as the Reverend St John Rivers, certainly did the trick.” – The Guardian

“Five Stars. The tears in our eyes at the end of this professional première of John Joubert’s Jane Eyre were quickened not only by the ravishing music of Jane and Rochester’s reconciliation, but also by the sheer emotional importance of the occasion … Joubert’s vision was finally fulfilled … the near-ninety year-old acknowledged thunderous applause after a tremendous performance of a wonderful score” – Birmingham Post

“Five Stars. The support from cast members was exemplary, and the orchestra … in the warm and immediate acoustic of Birmingham’s Ruddock Hall, sounded polished and vibrant … there was an added poignancy in the standing ovation, and a feeling that something of real value had taken place: an important contribution to the repertoire, deserving of a place on the world opera stage.” – Bachtrack

“the 2 CD set release will be quite an event … a passionate work and full of heart … we can look forward to the release of what is likely to prove a glowing entry in the annals of recorded English opera.” – MusicWeb International

“A world première positively reeking of drama and tension … it took this Birmingham audience by storm. Fredrick was utterly absorbing to listen to … Stout matched her at every turn … the English Symphony Orchestra as committed and on the ball as I’ve heard them … conducted throughout with wonderful command and control by Kenneth Woods … a truly rich experience.” – Music and Vision Daily

“the work makes a powerful impact … April Fredrick captured the development of the character well … Her voice is warm and attractive across a wide range and the resolve of the character shone through. David Stout’s brooding Rochester was also impressive … Kenneth Woods conducted with aplomb, and the recording is much looked forward to.” – Classical Source