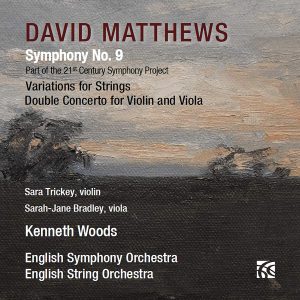 “Stunning concert with every piece done to perfection. The superb Sheku Kanneh-Mason in the Elgar. The world premiere of David Matthews’ 9th Symphony. And a terrific orchestration of the Elgar Piano Quintet. Everything presided over by the urbane Kenneth Woods” ,  James Jolly, Editor-in-Chief,  Gramophone , May 2018

“His ninth symphony, receiving its world premiere on this release, is a kind of summation. Starting with a self-composed carol and extending to a Bach chorale, it represents the best of British creativity in its craftsmanship, its moderation and its lucid rationale. The language, while tonal, is two generations beyond Vaughan Williams and the narrative reflects something of a thinking mans struggle to maintain a reasoned equilibrium in a threatened universe. A violin solo in the third movement recalls The Lark Ascending, if only in its distant unattainability. Something of the late symphonies of Malcolm Arnold rises elliptically in the finale. This is a lovely symphony, an altogether personal utterance by a composer who lives and breathes symphonic form, who writes out of love for each and every instrument of the orchestra. Kenneth Woods conducts the sweet serenity that is the English Symphony Orchestra. The five movements are over all too soon in 26 minutes. A set of variations for string orchestra and a double concerto for violin and viola round off the album. I am saving them for the weekend. This is music to hold close and to savour at leisure.” —Norman Lebrecht, Lebrecht Listens, Ludwig Van

“…Matthews’s symphony seems to me to belong instead to that particular British literary tradition, from Gilbert White to Richard Mabey, which finds spiritual renewal in a meticulous and unsentimental observation of nature. The audience at St George’s Bristol — where Kenneth Woods conducted the world première with the English Symphony Orchestra — actually cheered…” Richard Bratby – The Spectator

“David Matthews’ Ninth Symphony is a highly impressive composition. It’s extremely attractive and it’s brilliantly conceived for the orchestra. It’s been well worth the wait to hear this important work which, having made a strong first impression on me, has seemed even better the more I’ve listened to it. The work is splendidly served by Kenneth Woods and the English Symphony Orchestra, who turn in a highly assured performance. This is an important release….” John Quinn – MusicWeb International

“Much of the opening movement does stem from the guileless carol melody that had fired the creative process. Matthews likens it to the naive theme that begins Nielsen’s Sixth Symphony, but where in that work the result is sardonic and almost nihilistic, here the ingenious transformations generate exuberant invention…a work that otherwise manages to seem unmistakably British without ever becoming derivative.” Andrew Clemments – The Guardian

“A remarkable, enjoyable disc, brilliantly performed by Kenneth Woods’ English Symphony Orchestra. Buy multiple copies and distribute to the ones you love… This is easy music to love, a modern expression of the English pastoral tradition which never descends into easy pastiche… Matthews’ euphonious Double Concerto for Violin and Viola is another find, the point at which both soloists imitate nightingale calls quietly magical. ” Graham Rickson – The Arts Desk
“Some would say the symphony is now a musical outfitters of dead men’s clothes. Matthews contends otherwise in a cycle that has steadily gathered momentum and purpose during the past decade to culminate (for now) in a cogent five movement structure… Dating from 1986, a set of eight variations on a troubled Bach chorale deserves a place in the canon of celebrated English string literature from Purcell through to Elgar, Bridge and Tippett.” Peter Quantrill – Gramophone
Recording of the Month – MusicWeb International “Matthews could scarcely imagine that this recent addition to his symphonic canon will receive superior advocacy than that lavished upon it by the indefatigable Kenneth Woods  and his  English Symphony Orchestra …this set of Variations amounts to yet another worthy candidate for the burgeoning genre we think of as ‘English String Classics’.” Richard Hanlon – MusicWeb International

“David Matthews is the author of a personal, original, spontaneous and authentic body of work…the most influential exponent of English music after Benjamin Britten and Michael Tippett… The Variations are “a moving composition where the beautiful passages that reflect the talent of the composer are not lacking… The orchestra remains in splendid second form…  Kenneth Woods, conductor  a reflective director, of intrepid vocation and a refined expressiveness, makes an essential contribution to the British symphonic creation.” Carmé Miro – Sonograma

Five Stars! “…given the chance, many music lovers would embrace this melodic, vigorous and engaging work. Congratulations then to Kenneth Woods, conductor and the English Symphony Orchestra’s “21st Century Symphony Project” for that performance and this recording.” Norman Stinchchombe, The Birmingham Post