Concert Review – Musical Opinion on Mozart and Matthews in Malvern 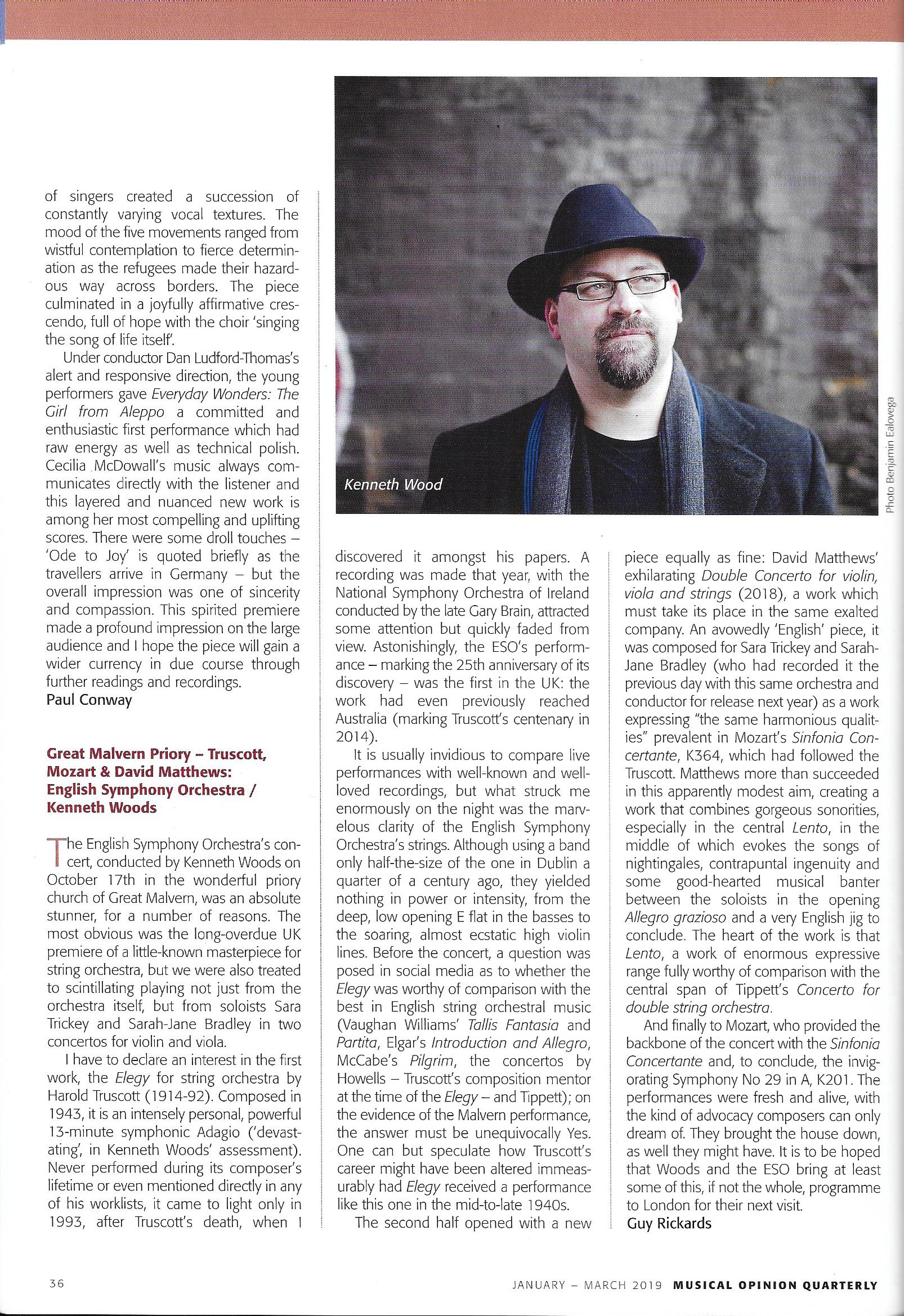 “The performances were fresh and alive, with the kind advocacy composers can only dream of. They brought the house down, as well they might have.”

“The English Symphony Orchestra’s latest concert, conducted by Kenneth Woods, on October 17th in the wonderful Priory Church of Great Malvern, was an absolute stunner, for a number of reasons. The most obvious was the long-overdue UK premiere of a little-known masterpiece for string orchestra, but we were also treated to scintillating playing not just from the orchestra itself, but from soloists Sara Trickey and Sarah-Jane Bradley in two concertos for violin and viola.

“I have to declare an interest in the first work, the Elegy for String Orchestra by Harold Truscott (1914-92). Composed in 1943, it is an intensely personal, powerful 13-minute symphonic adagio (‘devastating’, in Kenneth Woods’ assessment). Never performed during its composer’s lifetime or even mentioned directly in any of his work-lists, it came to light only in 1993, after Truscott’s death, when I discovered it amongst his papers. A recording was made that year, with the National Symphony Orchestra of Ireland conducted by the late Gary Brain, attracted some attention but quickly faded from view. Astonishingly, the ESO’s performance—marking the 25th anniversary of its discovery—was the first in the UK: the work had even previously reached Australia (marking Truscott’s centenary in 2014).

“It is usually invidious to compare live performances with well-known and well-loved recordings, but what struck me enormously on the night was the marvellous clarity of the English Symphony Orchestra’s strings. Although using a band only half-the-size of the one in Dublin a quarter of a century ago, they yielded nothing in power or intensity, from the deep, low opening E flat in the basses to the soaring, almost ecstatic high violin lines. Before the concert, a question was posed in social media as to whether the Elegy was worthy of comparison with the best in English string orchestral music (Vaughan Williams’ Tallis Fantasia and Partita, Elgar’s Introduction and Allegro, McCabe’s Pilgrim, the Concertos by Howells—Truscott’s composition mentor at the time of the Elegy—and Tippett); on the evidence of the Malvern performance, the answer must be unequivocally Yes. One can but speculate how Truscott’s career might have been altered immeasurably had Elegy received a performance like this one in the mid-to-late 1940s.

“The second half opened with a new piece equally as fine: David Matthews’ exhilarating Double Concerto for violin, viola and strings (2018), a work which must take its place in the same exalted company. An avowedly ‘English’ piece, it was composed for Sara Trickey and Sarah-Jane Bradley (who had recorded it the previous day with this same orchestra and conductor for release next year) as a work expressing “the same harmonious qualities” prevalent in Mozart’s Sinfonia Concertante, K364, which had followed the Truscott. Matthews more than succeeded in this apparently modest aim, creating a work that combines gorgeous sonorities, especially in the central Lento, in the middle of which evokes the songs of nightingales, contrapuntal ingenuity and some good-hearted musical banter between the soloists in the opening Allegro grazioso and a very English jig to conclude. The heart of the work is that Lento, a work of enormous expressive range fully worthy of comparison with the central span of Tippett’s Concerto for double string orchestra.

“And finally to Mozart, who provided the backbone of the concert with the Sinfonia Concertante and, to conclude, the invigorating Symphony No 29 in A, K201. The performances were fresh and alive, with the kind advocacy composers can only dream of. They brought the house down, as well they might have. It is to be hoped that Woods and the ESO bring at least some of this, if not the whole, programme to London for their next visit.
— Guy Rickards 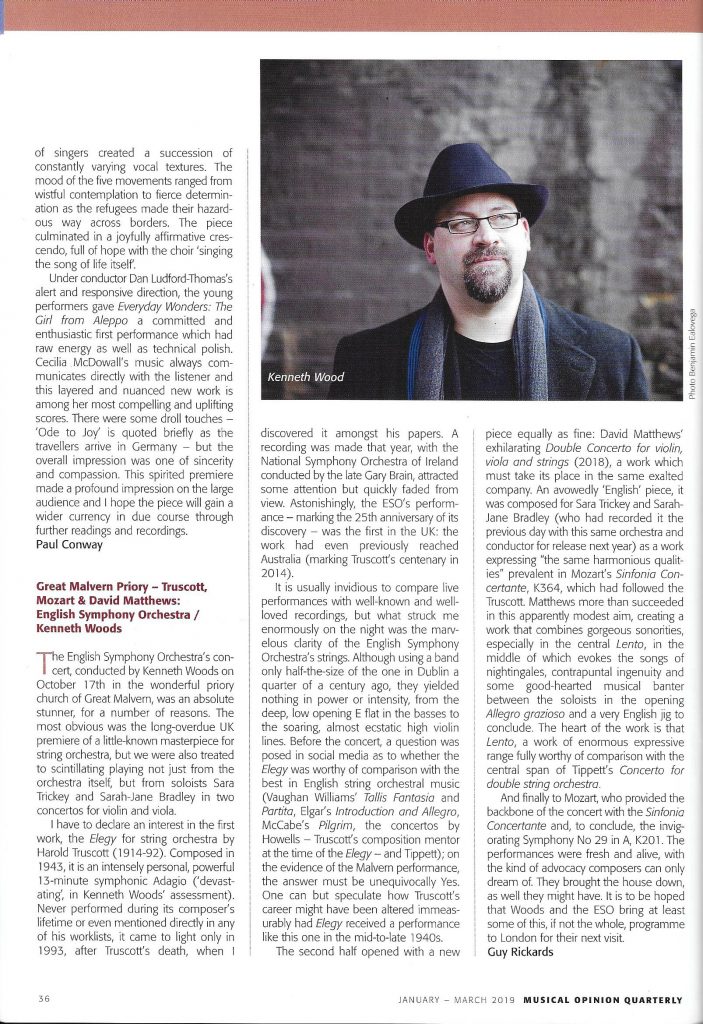