Michael Karcher-Young is co-founder and Artistic Director of the Beethoven Orchestra for Humanity, a new kind of professional chamber orchestra and immersive concert experience ‘fusing topical talk and classical music for today’s world.’ He has been Music Director of Charities Philharmonia, London Youth Opera, Little Operations and founding conductor of the Vanbrugh Ensemble. Michael has won several prizes at the Leeds Conductors’ Competition and the Ninth International Pedrotti Conducting Competition. 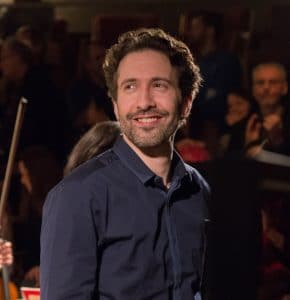 “…They flew with their music, just on the safe side of reckless. Michael Alexander Young, the conductor, doing the whole concert without a score, was brilliant and so intense, so interested in the wildly energetic passages of the music, the overcoming, triumphing, soaring horns and oboes and cymbals and tympanis. “-Elisabeth Young-Bruehl, London Weekend Diary  (June 2011)

“The first symphony of Strauss’s friend Brahms was given with an intensity and insight which was second to none… [Strauss Oboe Concerto] Here Aviat and Young, for the first time in my experience, found exactly the right tone and feel for the music and delivered a performance without ever seeing it necessary to force the music and showing it to be the winsome flower it actually is. This was magnificent. “–Bob Briggs, Musical Opinion (March 2010)

“…The programme [was] crowned by a performance of The Rite of Spring that was absolutely outstanding. The rare qualities which made this performance stand out were that this was a real interpretation with the inherently wild rustic element of uncultured folk-based material given with a genuine sense of style throughout. This made the work cohere at every level, the result of a single-minded direction by Michael Alexander Young.”– Robert Matthew-Walker / Musical Opinion (January 2009)