The ESO are delighted to announce the appointment of Matthew Sharp, one of today’s most original and exciting talents, as Artist-in-Association from 2015. Active as a solo cellist, bass-baritone, actor and director, Sharp will be appearing alongside the ESO in concert and recording and will take an active role in the orchestra’s outreach and educational programmes. 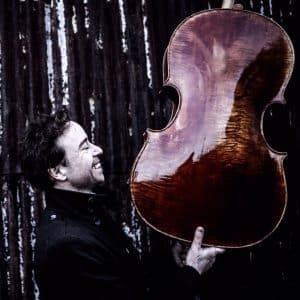 Principal Conductor Kenneth Woods says of the appointment: “Matthew’s skill set is, as far as I know, unique, even unprecedented in terms the breadth of what he can do on stage. What unites all his work, whether playing, narrating, singing or directing, is a deeply felt passion to engage with audiences, to make them feel like active and valued participants in the concert experience.”

Recording projects will form an important part of the ESO/Sharp partnership, with Sharp appearing as cellist in the world-premiere recording of Hans Gál’s Concertino for Cello and Strings and as bass-baritone in Shostakovich’s Fourteenth Symphony alongside soprano April Fredrick. Sharp is also directing a theatrical staging of the Shostakovich which the ESO will be touring in 2016-7. Sharp, who made is ESO debut with the Gál Concertino in Malvern in 2013, will next be appearing with orchestra in Kile Smith’s song cycle “Plain Truths” as part of Worcester Cathedral’s Magna Carta Celebrations, and as narrator, host and soloist on the orchestra’s Halloween Spooktacular, a family concert in support of the orchestra’s concerts for people living with dementia.

Matthew Sharp studied cello with Boris Pergamenschikow in Cologne, voice with Ulla Blom in Stockholm and English at Trinity College, Cambridge. He has performed at major venues and festivals worldwide as solo cellist, baritone and actor.

Matthew has appeared as solo performer with the RPO, LPO, RLPO, CBSO, Orchestra of Opera North, SCO, EUCO, ESO, Manchester Camerata, Orchestra of the Swan, Arensky Chamber Orchestra, and Ural Philharmonic, performed principal roles for Opera North (Papageno, Pied Piper), ROH2 (Exposure, Pleasure’s Progress), Almeida Opera (The Silent Twins) and the Young Vic (Wolf and Hero) and National Theatre Studio, given solo performances at the Glastonbury and Latitude festivals, and at festivals from Sydney to Toronto, Sao Paulo to Delhi, recorded for Sony, EMI, Decca, Naxos, Somm and Avie, given over fifty world premieres – including the title role in Sir John Tavener’s The Fool and Errollyn Wallen’s Cello Concerto – and appeared in recital as cellist and singer at Wigmore Hall, SBC and Salle Gaveau. As writer, composer, performer and director, he collaborates regularly with leading artists from film, theatre and dance. As chamber musician, he has performed with the Amphion, Heath, Sacconi, Vertavo and Villiers quartets, Ensemble Epomeo and the Galliard Ensemble, with members of Brooklyn Rider, Grammy-nominated A Far Cry and Ensemble 360 and with, amongst others, Nicola Benedetti, David Le Page, Nicholas Daniel, Martin Frost, Craig Ogden, Ksenija Sidorova, Katya Apekisheva, Leslie Howard, Stephen Kovacevich, Viv Mclean and Johan Ullen. His music theatre works have toured to major festivals in Europe, India, China and the US. Matthew is Creative Director of Revelation St Mary’s, Ashford – recently selected by the Royal Opera House as its ‘links’ partner – and artist-in-association with the English Symphony Orchestra. He was artistic director of the Deal Festival for three years, transforming its profile, smashing box office records and introducing a year-round outreach initiative called Pyramideal.

Recent highlights include the London premiere of Whale Music by Matthew and bansuri flautist, Sameer Rao with words by Sir Andrew Motion at the South Bank’s Alchemy Festival, a highly acclaimed production of Salieri’s Prima la musica e poi le parole for West Green Opera Festival (which Matthew directed and sang the role of The Maestro in), a UK tour and the US premiere of the pioneering new concerto work Death’s Cabaret – A Love Story by Stephen Deazley and Martin Riley, the world premiere of Faustus – The Last Bus Home, a one-man opera commissioned especially for Matthew by Sound Festival, solo cello recordings for DECCA (Voces8’s chart-topping albums Eventide and Lux) and his pioneering festival RE:naissance at London’s Kings Place.

Upcoming highlights include recordings with Ken and the ESO including works by Hans Gal and Paul Hindemith, Errollyn Wallen’s cello concerto, HK Gruber’s Frankenstein!, Weill and Schoenberg with Thomas Kemp and Chamber Domaine, the release of ZRI’s now acclaimed re-imagining of Brahms’ Clarinet Quintet, a solo disc of devotional works from across denominations and the world for multi-tracked cello and voice, a Schubert/Brel project, songs and works for violin and piano by Schumann and Brahms and Finzi with Aurora Orchestra. He will be premiering Tommy Foggo – Superhero in the autumn – an interactive musical adventure for 7-14yr olds and their families commissioned especially for Matthew from Stephen Deazley and Martin Riley. His epic show for Opera North, The Devil’s Jukebox, travels to the Wilderness Festival, he collaborates with jazz supremo Iain Ballamy at the Manchester Jazz Festival and his new concerto collaboration with Stopgap Dance, the London Contemporary Orchestra and composer Richard Dubugnon premieres Spring 2016.

Matthew has been a guest lecturer at GSMD, RWCMD, RCSSD, Trinity Laban, Dartington College and Leeds and Portsmouth Universities. He has devised and delivered masterclasses and bespoke and pioneering workshops and projects for Juilliard, ENO, Opera North, WNO, ETO, Philharmonia, LPO, Orchestra of the Swan, Theatre de Complicité, Barbican, South Bank Centre, Wigmore Hall, the International Ingenium Academy and CoMA, and in India, Russia and Scandinavia.

‘Matthew Sharp, virtuoso of the arts.’ The Times

‘An extraordinary cellist – charismatic, virtuosic, brimming with verve and poetry.’ The Times

‘Matthew Sharp’s singing raised the evening to a pitch of spiritual feverishness rarely encountered in either concert hall or theatre.’ Independent on Sunday

‘a triumphant Wigmore recital’ The Strad

‘Matthew Sharp’s performance was moving in the extreme.’ The Independent

‘I was genuinely blown away by his performance of my music. He is a stunning cellist and singer, unique communicator and, I believe, one of the most exciting musicians of his generation.’ Mark-Anthony Turnage, composer