About the ESO’s ‘Art of Storytelling’ Project

About the Piece - Hansel and Gretel

I wrote Hansel and Gretel to perform with the children’s musical troupe Auricolae in 2008, and orchestrated it a few years later, at the behest of Maestro Kenneth Woods. Perhaps in response to the gothic nature of the story, the piece is very self-consciously Germanic; the leitmotifs for Hansel and Gretel are both Wagnerian in character (although Hansel’s theme originated as an alteration of Schubert’s “Das Wandern”), and the witch/stepmother’s theme is a Schoenbergian tone row. The woodcutter’s theme, the first music one hears in the piece, is a thinly disguised motive from Strauss’ “Metamorphosen,” which Strauss himself had lifted from the funeral march in Beethoven’s “Eroica” symphony. In a particularly grandiose touch, all the tempo and character markings are in German as well (I don’t speak German); of course, this doesn’t need to concern the listener at all, but I thought of it as an in-joke between myself and the performers. My gratitude and awe also go to Henry Goodman, whose nuanced and thrilling interpretation of the story elevates the piece immeasurably.

About the Narrator - Henry Goodman 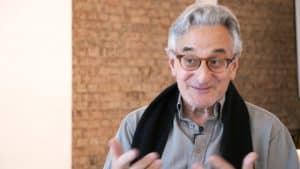 Henry Goodman is a leading English actor who has worked extensively in television, film and in theatre (Broadway, West End, NT & RSC). On stage in the UK, Goodman played the role of Arturo Ui in “Arturo Ui”, Shylock in “The Merchant of Venice”, Billy Flynn in “Chicago” and Charles Guiteau in “Assassins”. On Broadway he played the title role in Tartuffe and Serge in “Art” among others. He has won numerous awards for his theatre work. TV credits include Sir Humphrey in “Yes, Prime Minister” and more recently “The New Pope”. Film credits include “The Chosen One”, “The Last Planet”, “The Good Traitor”, “Avengers: Age of Ultron”, “Their Finest”, “The Limehouse Golem”, “Woman in Gold”, “Notting Hill”, “Hunter Killer”, “Driftwood” and “Love Gets A Room”. Recent audio work includes: “Victoria Park” by Gemma Reeves, “Jaws” by Peter Benchley and ‘Fall: The Mystery of Robert Maxwell by John Preston both for BBC Radio 4.

About the Composer - Thomas Kraines

Thomas Kraines has forged a multifaceted career as a cellist and composer, equally comfortable with avant-garde improvisation, new music, and traditional chamber music and solo repertoire. A member of the Daedalus Quartet, Mr. Kraines also performs frequently with the Network for New Music, the Arcana Ensemble, and as a duo with cellist Kinan Abou-afach. He is also an accomplished composer of chamber music; his works have been performed around the world by artists such as pianists Awadagin Pratt and Wayman Chin, violinists Corey Cerovsek and Jennifer Frautschi, and sopranos Maria Jette and Ilana Davidson. Kraines has given musical improvisation workshops and performances at the Longy School of Music, the University of Florida at Gainesville, and the University of Pennsylvania. He has taught at the Peabody Conservatory, the Longy School of Music, the Killington Music Festival, Yellow Barn, and Princeton University, and currently teaches at the University of Pennsylvania.

About Musical Storytelling: Zoë Beyers in conversation with David Yang and Kenneth Woods

The English Symphony Orchestra reaches the penultimate instalment of its series for virtual storytelling with one of the most enduring among fairy tales – Hansel and Gretel, here given in the more abrasive version such as leaves little or no room for sentimental embellishments.

Although it has always been a parable for the playing-off of good against evil, the intensified recent concern about the exploitation of children has given this story a more ominous undertow. Little of that was emphasized here, yet the scenario remains one where the brutal corrupting of innocence is foremost; whether in the guise of the stepmother, rendered here in scarifying Irish, or that of the witch whose tendency to caricature is judged to a nicety. That neither children nor woodcutter exudes much in the way of persona may itself be significant.

As will have been realized, Henry Goodman is an animated and appealing narrator as he leads the listener through a story where incident likely counts for more than the ultimate destination. The score itself shows Thomas Kraines’s knack for moving across genres and styles with real sureness of touch, alighting on elements of German romanticism and expressionism to inflect those highpoints of the narrative. That the theme for the stepmother and the witch is a 12-note row brings a fresh perspective to a conceit whose lineage stretches back over nearly a century.

As in previous instalments the ESO musicians play with skill and sensitivity, Kenneth Woods ensuring clarity and balance even in the densest textures. The presentation is sure to provoke children of all ages and, as usual, a range of sundry material enhances the overall experience.