A new review in the January issue of Gramophone for our recent Nimbus Records recording of orchestral music of Philip Sawyers with Alexander Sitkovetsky and Simon Desbruslais.

“Nimbus’s coverage of Philip Sawyers continues with a release of orchestral pieces written during 2015‑17. Rawsthorne has been cited in connection with his music, and if the Violin Concerto only tacitly resembles that composer’s second such work, it does exude a distinct mid20th-century quality in its formal and expressive objectivity. Both the outer movements keep their lyricism firmly in check through a tensile rhythmic sense, with even the Andante having a restiveness and tension to offset any hint of indulgence: no nostalgic lingering here.

“Alexander Sitkovetsky renders this piece with appropriate verve, as does Simon Desbruslais the Concerto for trumpet, strings and timpani that arguably leaves the stronger impression. Here the combative outer Allegros make incisive play with this three-way combination, and the central slow movement explores emotional depths which seem the greater for not being dwelt upon. Such probing intensity is no less tangible in The Valley of Vision, a symphonic poem inspired by Samuel Palmer – notably his visionary early landscapes – whose control of momentum, through to the climactic faster section before returning to its initial pensiveness, is never in doubt. Elegiac Rhapsody, Sawyers’s ‘song without words’ written in response to the death of John McCabe, concludes this disc in understated yet affecting manner.

“The English SO are unfailingly committed in the perceptive hands of Kenneth Woods, who joins the composer in contributing perceptive booklet notes. Head first to Sawyers’s Second (10/14) or Third (10/17) Symphonies, to either of which this disc is an admirable follow-up. Richard Whitehouse 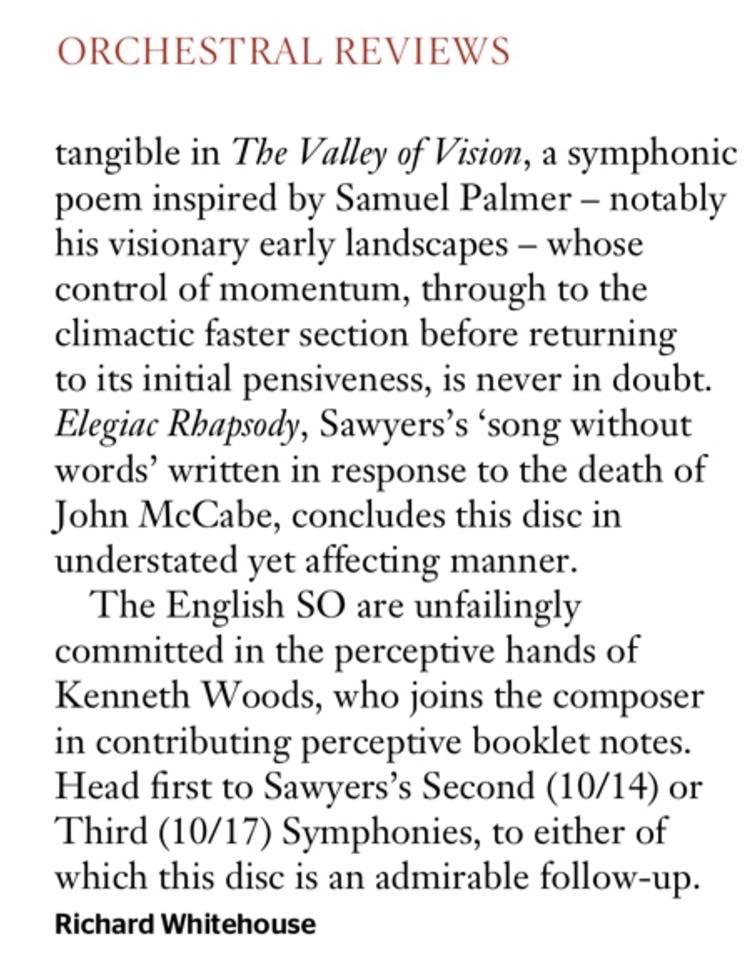