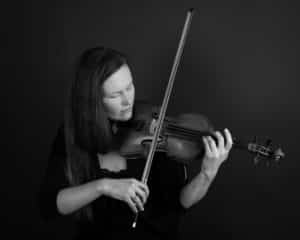 Mozart was just sixteen years old when he composed his Divertimento in D, following a successful tour of Italy. Although the divertimenti compositions (K.136 – 138) are often grouped with his string quartets, the orchestration and character of these works lend themselves very comfortably to string orchestras and larger string ensembles. In fact, Mozart-enthusiast Albert Einstein speculated that Mozart composed these works just in case he needed a last-minute symphony for his next Italian tour – all he needed to do was add the wind parts.

Composed in 1928, when Finzi was in his twenties, his Romance in E flat major displays his profound love of the English countryside, where he devoted himself to composing and apple-growing. Finzi also had a close association with the Three Choirs Festival, much like the English Symphony Orchestra, who originally performed one of his most well-known compositions, Dies Natalis.

Bach’s Brandenburg Concertos were effectively written as an instrumental job application for the German aristocracy and unfortunately these iconic concertos were unlikely to have been performed during his lifetime. They were later discovered in the Brandenburg archives almost 100 years after Bach’s death, but to this day they remain some of the finest examples of Baroque instrumental music.

We’re all familiar with the four seasons, sometimes we experience all of them in just one day! But Vivaldi’s Four Seasons is a monumental work that has been performed for centuries by string ensembles, and even sampled on TV shows, films, commercials, and ringtones and on the 23rd November 2021 the English String Orchestra are performing this seminal work in Malvern, directed by Zoë Beyers.