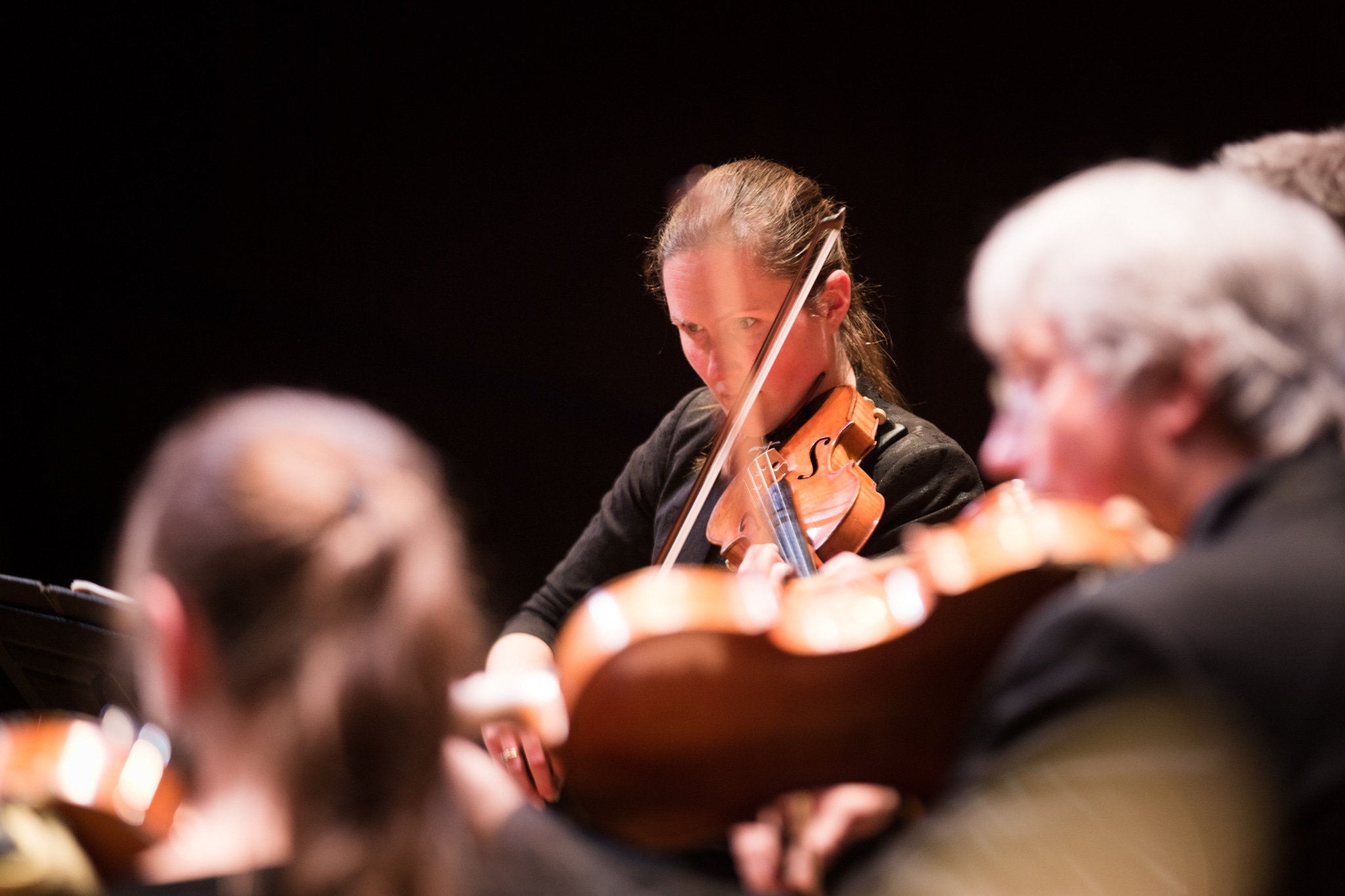 On Sunday the 1st of October, the English Symphony Orchestra will return to the Shirehall stage for a new season of their highly popular and engaging Shirehall Sunday concerts with a diverse international programme celebrating folk music and humour.

The concert features a star turn for the ESO’s recently appointed Leader, violinist Zoë Beyers, who will perform Darius Milhaud’s ballet-concerto “Le boeuf sur le toit” or “The Ox on the Roof.”

“The title is a pretty clear indication that we’re not dealing with the deadly serious side of music in this piece,” says Kenneth Woods, the ESO’s Artistic Director, who will be conducting the concert. “Milhaud was one of the first composers to be interested in the ideas of the surrealists, and this is a funny, bizarre, wacky piece. It takes its title from one of 30 Brazilian popular songs, tangos, sambas and bossas nova Milhaud quotes in this ballet, which was first choreographed by Jean Cocteau. It was a huge hit when he wrote it- so much so that it is, to the best of my knowledge, the only piece of classical music to inspire the building of a successful nightclub in Paris.”

“Milhaud was no fool as a business man,” says Woods, “so when he realised the public appeal of the piece, he made an alternate version of it as a violin concerto, and that’s what Zoë will be playing. He slightly miscalculated and made it so stupefying virtuosic that only a handful of violinists in the ensuing decades have dared to tackle it.”

Beyers, a native of South Africa who was appointed Leader of the ESO in March, has already established an international reputation as one of the leading violinists of her generation, and just the sort of super-virtuoso player Milhaud’s writing demands. Since her solo debut aged eleven with the Swedish Chamber Orchestra under Paavo Järvi, she has performed with many distinguished conductors throughout Europe and Africa. Zoë has been associate leader of the City of Birmingham Symphony Orchestra and works regularly as guest leader with the Philharmonia, BBC, Scottish Chamber Orchestra and more. “We couldn’t be more excited to have Zoë as part of our team,” says Woods. “In addition to all her musical gifts, she’s really committed to supporting the ESO’s important work with young people.”

Says Beyers of her concerto debut with the ESO “I’m really looking forward to playing a programme that shows that real humour and earthiness in music are as powerful as the tragedy and grandeur we so often experience.  It’s great to be starting the season with a good laugh!”

The programme opens with Haydn’s Symphony no. 60 “Il distratto” or “The Absent-Minded Gentleman” a work Woods calls “possibly the funnies and most modern symphony ever written. Haydn anticipates so many 20th C. “isms” in this piece- surrealism, absurdism, modernism and even poly-stylism, and hops effortlessly from style to style with a sort of rapid-fire jump cutting”

Complementing the Milhaud are a selection of tangos by Astor Piazzolla. “Vernacular music, popular music, folk music- it’s all a vitally important part of what folks call “classical” music, as you’ll hear in the Haydn and Milhaud. Piazzolla has had such a huge influence on classical music in the last 50 years, it actually fits really well between Haydn and Mozart.”

The final work on the programme, Mozart’s Symphony no. 39, will see the ESO joined again by young musicians from their “Orchestral Scholars” programme, which offers aspiring players from Hereford Youth Orchestra and Hereford Sixth Form College a chance to perform in a professional orchestra under the guidance of an ESO mentor.