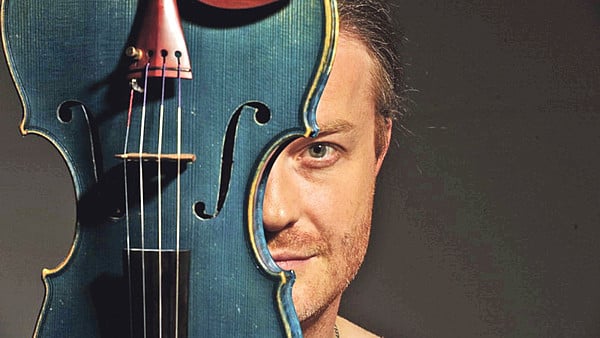 After saying goodbye to 2018 with a sold-out performance of Messiah in Malvern Priory, the English Symphony Orchestra will begin 2019 with a celebration of the music of Antonin Dvořák in Malvern Theatres featuring today’s leading Czech violinist, Pavel Šporcl, in a performance of the Dvořák Violin Concerto, a work he has recorded to international acclaim with Vladimir Ashkenazy and the Czech Philharmonic. The concert also includes Dvořák’s melodious and moving Eighth Symphony and a selection of his vivacious Slavonic Dances under the baton of the ESO’s Artistic Director, Kenneth Woods.

Šporcl brings a lifetime of experience to the Dvořák Violin Concerto, a work written for Joseph Joachim and described by ESO Artistic Director Kenneth Woods as “one of the most perfect and beautiful of all Romantic violin concerti.” Gramophone Magazine said of his live recording of the Dvořák that “his tonal variety and expressiveness in the lyrical passages are …magnetic, and the lightness and rhythmic spring of his playing heighten the finale’s Slavonic dance character.”

Hailed as an artist with a human touch, Šporcl likes to go beyond the classical music scene and collaborates with many non-classical music artists. His projects Gipsy Way (2008) and Gipsy Fire (2014) with gipsy cimbalom band has been received with great enthusiasm in many countries including China, and was seen in almost 300 concerts by more than 120,000 people. “We’re very excited to be working with Pavel,” says Woods. “He shares with the ESO an ethos that says there ought not to be any divide between quality and accessibility in the arts. He’s passionate about making his music available to everyone, and that is why he is one of the most popular artists in Europe today.”

The second half of the concert will be given over to Dvořák’s Eighth Symphony, a work particularly close to Woods’ heart. “Dvořák 8 was the first score I bought as a young musician curious about the role of the conductor and the art of the composer,” says Woods. “It’s one of those pieces which has been with me at every step of my musical life as student and professional, cellist and conductor.”

Considered by many critics to be Dvořák’s most melodic symphony, Woods describes the Eighth as “one of those very special works in which an embrace of childlike wonder and simplicity underpins a work of deep emotions.” The concert opens with what Woods describes as a “grab bag” of Dvořák’s Slavonic Dances.

The close of 2018 saw the ESO receiving a new round of accolades for their work. Their recording of Woods’ orchestration of the Brahms Piano Quartet in A major was chosen as one of The Arts Desk’s 10 Best Classical CDs of 2018, their recording of the Hans Gàl Cello Concertino was a MusicWeb International Recording of the Year, and their CD “Songs for Strings,” which debuted as Classic FM CD of the Week in August, was chosen a Favourite CD of 2018 by Classical Candor.

The ESO’s next concert, on the 16th of February, will be a concert performance of Act I of Wagner’s Die Walküre on 16 February in Worcester’s Swan Theatre

Join Kenneth Woods and the ESO for this celebration of the greatest of all Czech composers with today’s most popular and distinguished Czech violin virtuoso, Pavel Šporcl. Šporcl’s recording of his countryman’s concerto has been hailed by Gramophone as “…a warmly idiomatic reading…tonal variety and expressiveness….magnetic.”

The concert opens with a lively selection of Slavonic Dances and ends with a performance of Dvořák’s vibrant and tuneful Eighth Symphony.

Book online via Malvern Theatres or via eso.co.uk