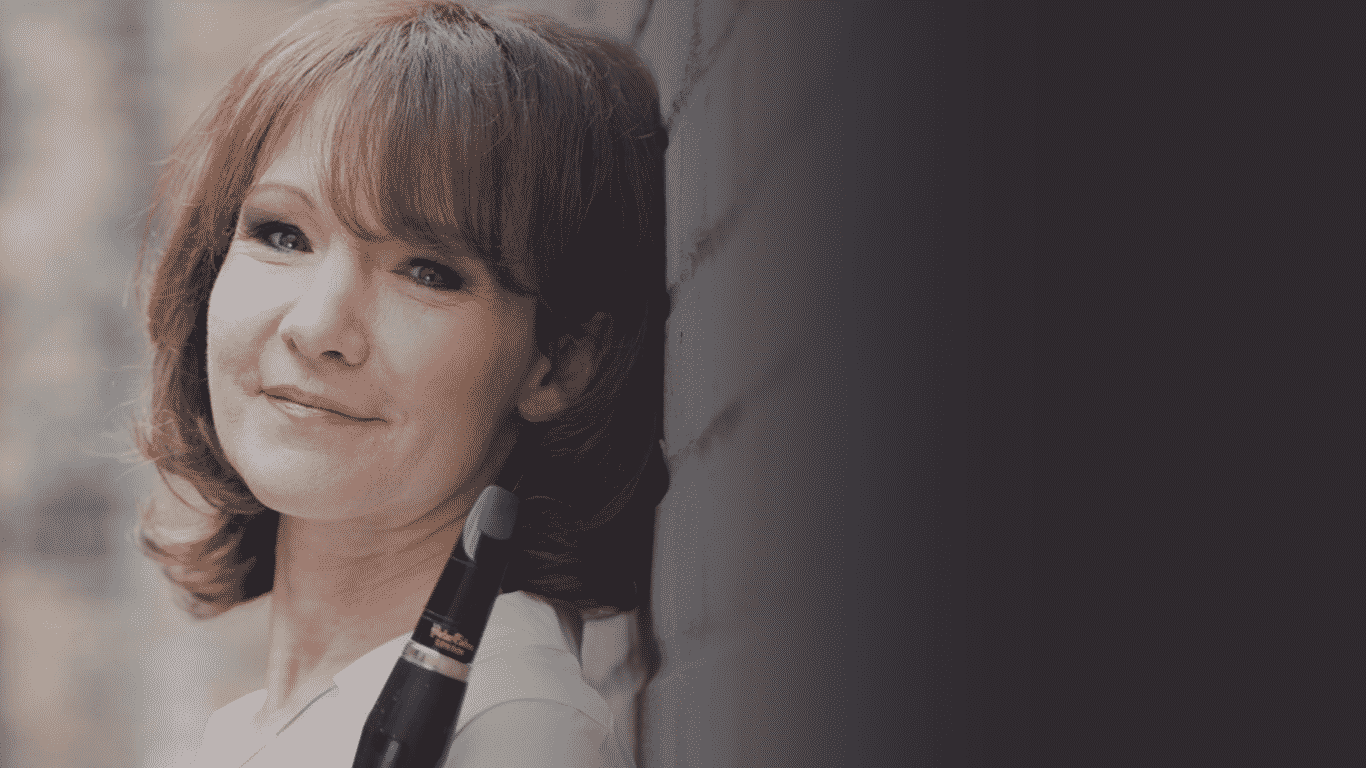 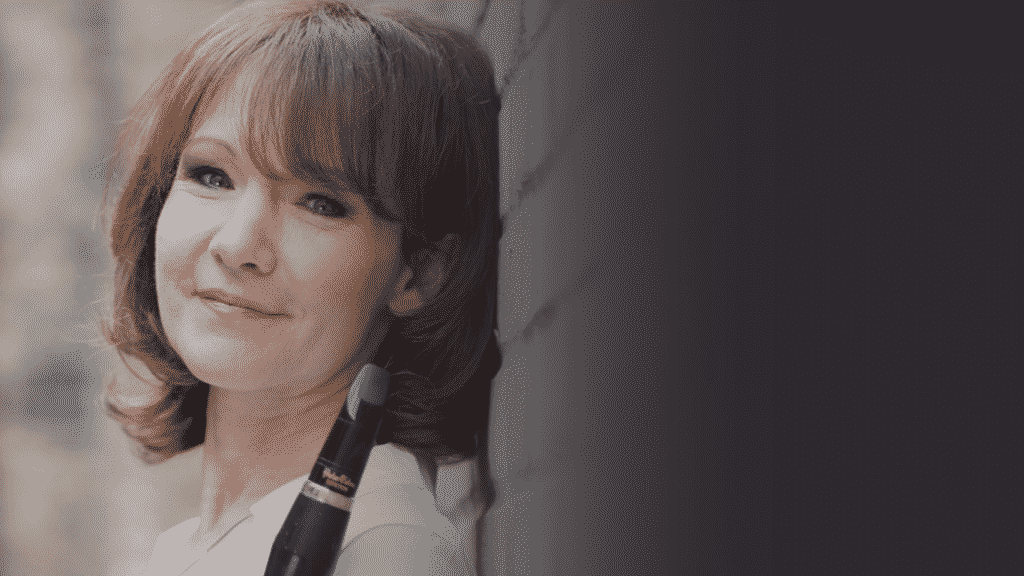 Any concert at St John’s Smith Square involving the English Symphony Orchestra and Kenneth Woods is an event. Last year they thrilled in a mostly all-Philip Sawyers’ concert, launching their 21st Century Symphonies initiative. This year, as part of the Americana ’18 festival, curated by David Wordsworth in celebration of the centenary of Leonard Bernstein in his roles as composer, conductor and educator, Woods programmed works that Bernstein himself had championed or had a connection with, cannily also including a new piece by a young composer whose talent ‘Lenny’ might well have nurtured were he still with us.

Bernstein was an early champion of Ives, recording three of the five symphonies, No 2 (1901), the unnumbered Holidays (1905-13) and the work which opened the ESO’s concert, the Pulitzer Prize-winning Third, The Camp Meeting. Originating in some hymn fantasies for organ circa 1901, Ives orchestrated and reworked them in 1904 into an early example of a chamber symphony, its first version completed two years before Schoenberg’s Op 9, and subsequently revised the work at different times between 1908 and 1911. It is scored for single woodwind, two horns, trombone, bells (used sparingly in just one passage) and strings, yet for all the smallness of the numbers, and some of Ives’ most translucent scoring, the Third feels like a big-boned work. In his pre-concert introduction, Woods revealing commented on the difference between Mahler—who allegedly took a score of The Camp Meeting with him on his final voyage—and Ives. To paraphrase, in Mahler, everyone gets up and goes off in step on a march; in Ives they do likewise but every now and again someone stumbles, falls out of step, careers off in a different direction or steps on someone’s toes. It is hard to play such composed ‘wrongs’ in the right way as there is always a reciprocal danger of getting the right notes wrong; Woods and the ESO righted all the wrongs without wronging any rights!

The living composer with whom Bernstein had the deepest and longest-lasting personal connection was Aaron Copland and this relationship was marked by a coruscating performance of the Clarinet Concerto. Originally composed in 1947-8, Copland revised it in 1949 before the premiere (given by Benny Goodman in November 1950), the version that is now standard. In recent years, though, the original 1948 version has been aired (the 1949 version is more refined) as well as some of the most difficult figurations intended for the soloist in the finale—and the work is immensely difficult for the soloist and the orchestra—having been transferred to the orchestral piano. Emma Johnson, dressed to match the score’s pizzazz in leather jacket, mini-skirt and knee-length boots, played these restored passages in a vibrant account of great virtuosity and expressivity. That it was taxing was visible to those sitting close to the stage, but this only added to the intensity of her performance. Woods secured some superb playing from the accompanying ESO in a score he knows well if one he has not conducted overmuch of late.

Bernstein premiered a large number of new scores in his long career and I can imagine that he would have been rather taken with Jesse Jones’ Smith Square Dances (2017), which received its premiere at the start of the second half. Jones (b1978) was barely twelve when Bernstein died in October 1990 but the latter cast a long shadow over American composition. Jones’ teachers included Roberto Sierra and Stephen Stucky and has acquired awards, fellowships and degrees the way other’s collect souvenirs. He is now Assistant Professor at the Oberlin Conservatory. The result of all this study is an enviable technique put in service of an acute musical imagination. Jones describes the piece as “jaunty and celebratory”, built from a horn call which is “twisted, stretched, fragmented, even turned on its head”. Jones relates that also had in his mind “a ridiculous image of ‘The Hart Royall’, dancing and turning joyfully though Smith Square”. In form, it can be described as a vivid small-orchestral toccata-cum-variation-form finale (to a suite not yet penned, perhaps?), that taxes the players in its hell-for-leather trajectory while highlighting the different sections. The ESO took it well within their stride but it needed more than one hearing to fully get to grips with. Smith Square Dances could not have been better timed, the premiere coming shortly after the announcement of the troubled concert hall’s latest financial difficulties.

And finally to Walter Piston and the first London performance that I can recall (in the past 40 years, at least) of his vivacious but by no means lightweight or trivial Sinfonietta (1941). Piston was Bernstein’s “primary music professor” at Harvard University and, of course, was mentor to scores of other American composers, including Carter, Rzewski, Irving Fine and many more. His book on orchestration remains a standard reference work, as do those on counterpoint and harmony. So the Sinfonietta then must be a worthy, academically adroit little symphony deftly but unimaginatively scored, right?

Wrong! Piston’s Sinfonietta is no more “academic” in design or impact than a Mahler symphony, though rather more tightly organised. As accomplished in design and serious in tone as any of his eight symphonies, the Sinfonietta cunningly juxtaposes and fuses gravity of expression, a winning lyrical genius and affable good humour. Had Piston titled the piece ‘symphony’—it was written between No 1 (1937) and the wonderful Second (1943)—it would not sound misnamed. The opening Allegro grazioso is marked by alternations of light and shade, tension and release, grippingly realised by \woods and his players. The central Adagio is graver still, but so winningly was the movement rendered that it seemed less a nightmare, more an exploration of some dark recess, promptly blown away by the Allegro vivo finale, another of Piston’s rollicking compound movements fusing scherzo and finale. And yes, it is very deftly and imaginatively orchestrated, and rightly brought the house down. 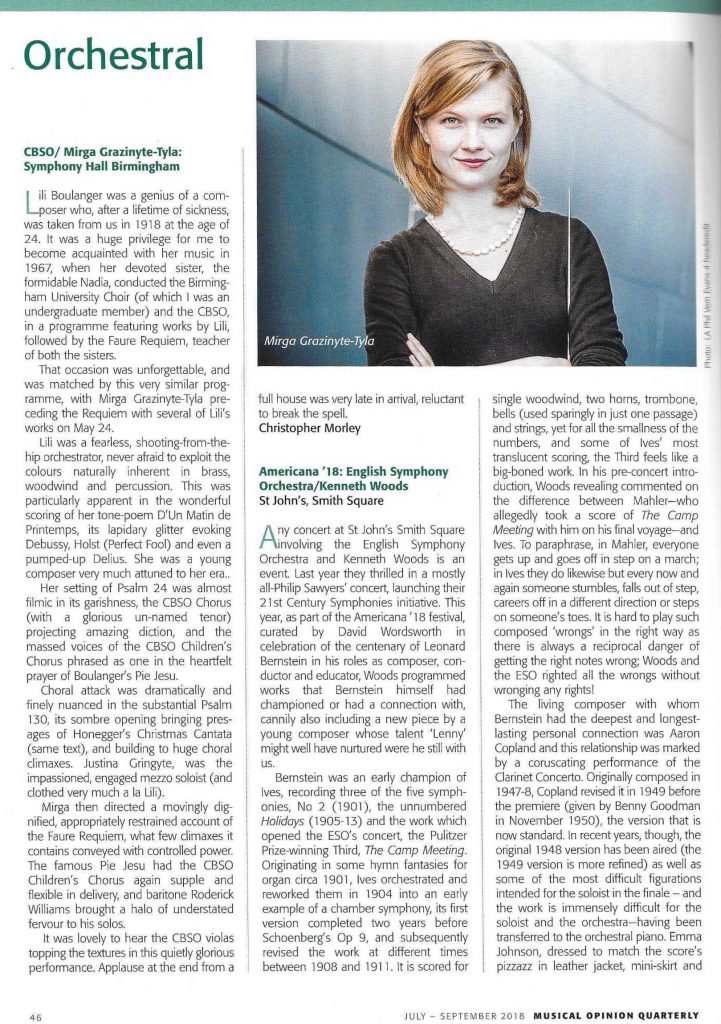 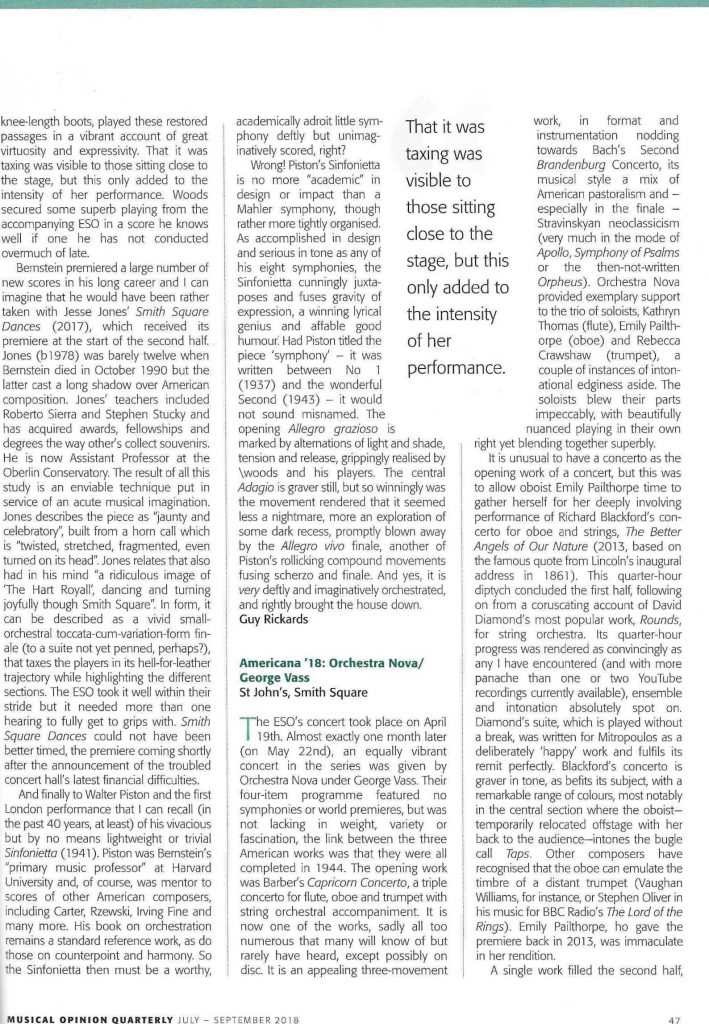