A wonderful new five- star review from Guy Rickards in Musical Opinion Quarterly for our latest Nimbus Records recording of concerti for violin and trumpet by Philip Sawyers featuring soloists Alexander Sitkovetsky and Simon Desbruslais under the baton of Kenneth Woods, conductor.

Get your copy here:
https://www.amazon.co.uk/Philip-Sawyers-Alexander-Sitkov…/…/ 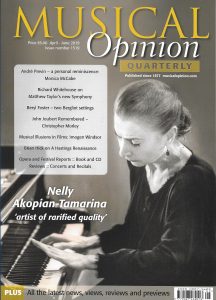 “Philip Sawyers (b1951) has rather stolen in on the consciousness of the British concert-going and record-buying public in the last few years. The advocacy of the English Symphony Orchestra, Kenneth Woods and Nimbus Records (NI 6129, NI 6281, NI 6353) have revealed him to be a master symphonist whose three symphonies should be ranked alongside those of David Matthews, Matthew Taylor and John Pickard (and there is a fourth symphony yet to be issued on disc). His many years as a practising orchestral violinist—not least at the Royal Opera House, Covent Garden—can be heard in the expert orchestration of all his scores.

“As a composer, there is no doubt that Sawyers is the real deal, a composer of extraordinary range; listen to Nimbus’ previous issue, NI 6353, of the magisterial Third Symphony and marvellous Songs of Loss and Regret, which latter contains a setting of Wilfred Owen’s Futility that outshines Britten’s famous version from the War Requiem. The Concerto form is another that appeals to him as this latest release almost overwhelmingly affirms. Britain is not short of superb violin concertos: Elgar, Walton, Britten, Brian, McCabe’s Second, Stevenson, Bernard Stevens, John Veale, Deborah Pritchard’s Wall of Water, Gunning, to name just a few, but Sawyers’ 2015-6 piece is worthy to rank with the best. From the calm first bars—especially in this alternatingly enchanting, witty and passionate account from Alexander Sitkovetsky—the Concerto feels like it has been in existence for years while sounding completely new. Sawyers’ music often does this, re-using or re-inventing elements of familiar musical language in wholly original ways. The turbulence of emotion that opening unleashes, however, if nothing else, tells one that this is the product of a master composer. So, too, does the central Andante with its stealthy intensification of mood, or the unbuttoned character of the Allegro finale, striking exactly the right mood to round off the whole. By rights, in twenty years’ time this concerto should be as familiar in the concert hall as Walton’s and Britten’s are now.

A quick word then on the couplings: the Trumpet Concerto (2015) and The Valley of Vision (2017—essentially a tone poem inspired by the countryside around Shoreham and Samuel Palmer’s paintings of it) are no mere fillers; were the Violin Concerto not on the disc, either would be the main event. Simon Desbruslais plays the Trumpet Concerto with great empathy and musicianship, as he does the brief Elegiac Rhapsody (2016), written in memoriam John McCabe—of whose trumpet works Desbruslais has been a noted exponent in recent years. The Rhapsody is a touching and not unsubstantial work but the Concerto rightly impresses more. The English String Orchestra play superbly (sadly, the timpanist in the concerto is not credited) as do their bigger sister ensemble, the English Symphony Orchestra, nowhere more so than in the lovely The Valley of Vision. The whole disc is a riveting listen: I do urge you to buy it.